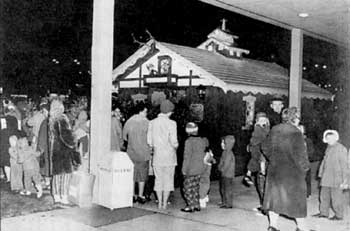 The Kooky Cooky House is being re-created by the talented staff at Discovery World on Milwaukee's downtown lakeshore.

Watch the press conference from October 22, 2014. The new Kooky Cooky House will open on Friday, November 28.

The Kooky Cooky House still lives in the memories of those who grew up in Milwaukee during the Sixties and Seventies.

The Kooky Cooky House was designed in 1960 by Walter E. Kroening, the general manager of Capitol Court. 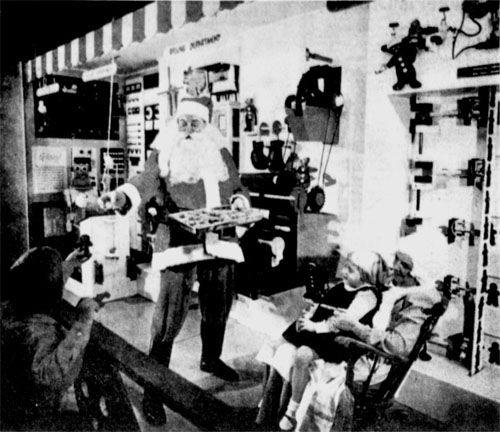 His headquarters, the Kooky Cooky house, is at the Capitol Court shopping center. His equipment consists of everything from cast-off water meters to a beer sign.

He is the brain child of Walter E. Kroening, 60, Capitol Court manager and a civil engineer who likes to dabble with such things.

Every year Kroening has had candy canes, toys and Santa Claus in the cable reserved for Santa. This year Kroening decided on the gingerbread boy
theme to attract youngsters and their parents to the shopping center during the Christmas season.

The Boss and his automated equipment are fun to watch. He sits behind panels of multicolored, flickering lights and directs operations by moving a
lever back and forth.

The operation is divided into five parts. Toy trucks bring eggs, molasses, milk, nutmeg and the other ingredients needed for cookies into the "factory".
This filters through pipes into the rolling department.

Here the dough is kneaded with two boxing gloves, then rolled flat with rolling pins and an old fashioned flat iron. A water wheel drives this operation.

A toy steam engine operates the cutting department, where a crank shaft pushes five cooky cutters against the dough as it passes on a belt line.

An airplane engine gives power to the decorating department. A piano key stamps on the eyes, nose and buttons of the gingerbread boys, which
finally travel into an old fashioned, black stove for baking.

Kroening explained that most of the parts that went into the whole business were cast-offs, contributions and things that Kroening himself developed.

It took four men four months to put the parts together, Kroening said.

By the time Christmas is over, Kroening said, about 100,000 cookies will be baked and given away.

It might be added that the cookies "baked" in the process are really foam rubber. But a "grandma" stationed in the Kooky Cooky house will give away
the real things.

The beer sign mentioned is certainly the animated bouncing ball type once used by Miller beer.

Kroening was general manager at Capitol Court for twenty-three years from 1953 to 1976. Before Capitol Court, he was village manager of Greendale,
a draftsman for A.O. Smith, and an engineer in the Milwaukee sewerage commission. In 1978, after many years as a volunteer, he became the first
executive director of the Zoological Society of Milwaukee County. He created and wrote the Animal Talk newsletter at the Zoo from 1963 through
September 1980, when he had a stroke. He passed away in February 1981. 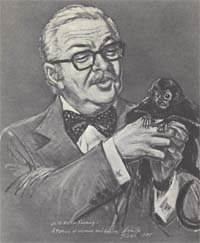 See Jim Stingl's columns about the Kooky Cooky House, as reprinted with permission from the Milwaukee Journal-Sentinel:

Although the articles above explain how the remaining pieces of the House were moved to storage at the
Kallas Honey Farm in 2001, the pieces were then shuffled to outside storage at the Milwaukee Zoo
in September 2003. Exposed to the weather, they deteriorated to the point that they were thrown out
without any hope of restoration. A few pieces were saved by subsequent fans - a wall panel, the cupola,
a window, a few signs.

Ray Chramega sent the first four advertisements below, as rescued from microfilm copies of the
Milwaukee Journal and Sentinel. Click on each thumbnail for a larger version. 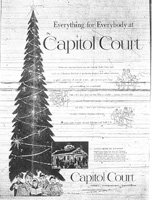 The color ad below and the coloring book below were sent by Randy Hilger. The next ad below was saved by Gino Salamone.

We've found two variations of the four-page coloring book. We believe all the Kooky Cooky House artwork was created by Vera Keller, the PR manager at Capitol Court. 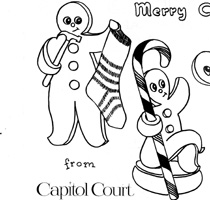 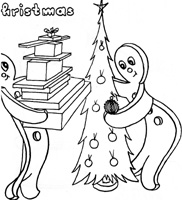 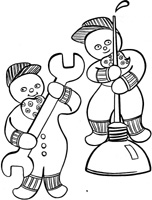 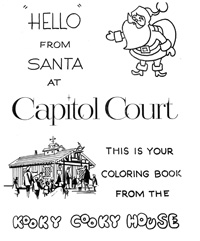 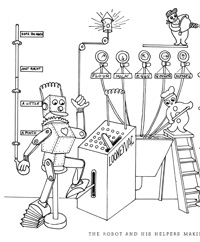 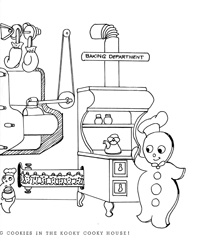 Milwaukee poet Matt Cook has a video once at ZeroTV about his memories of the Kooky Cooky House.

I wrote about this site at OnMilwaukee.com.

Gary Nosacek has a pair of stories about the Kooky Cooky House as well as Capitol Court in general.

Gino Salomone has a copy of a number of promotional clips once used by Capitol Court, including these peeks into the House.

Someone who would prefer to remain anonymous has a few items from the House: 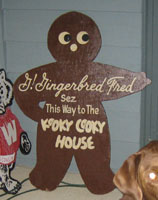 She said "I used to have the giant stove, but space didn't permit me keeping it, so I donated it to Pius XI High School's theater department."

I've tried to determine if the stove is still there, but no one seems to know where it went. 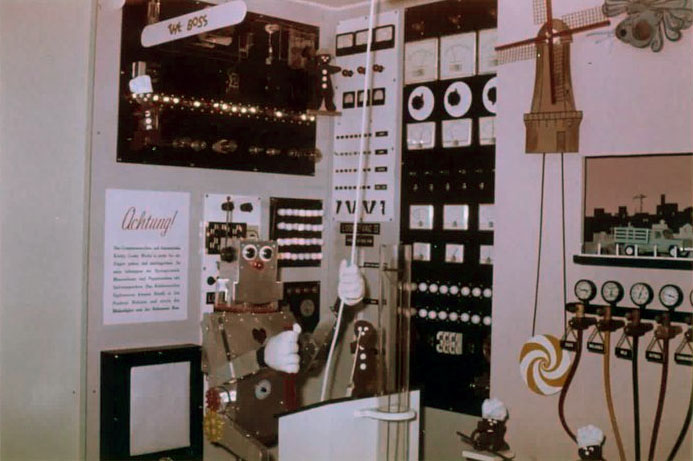 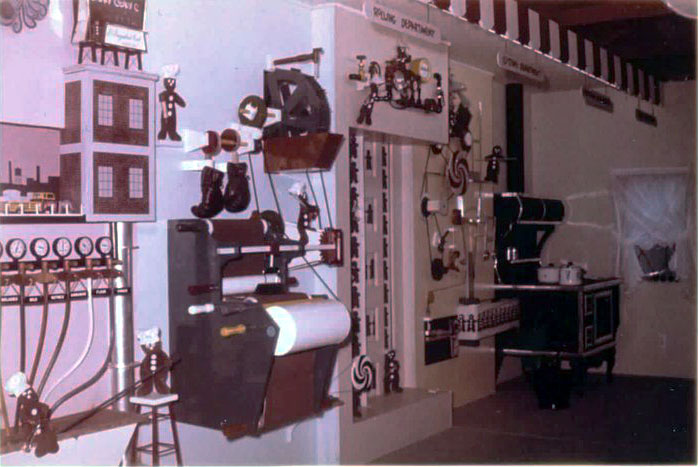 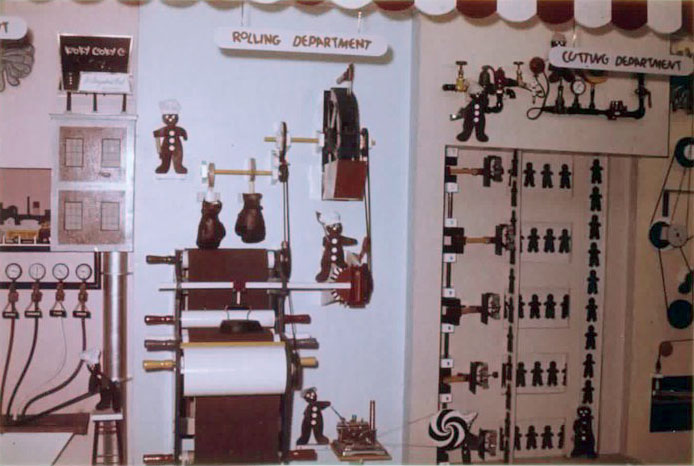 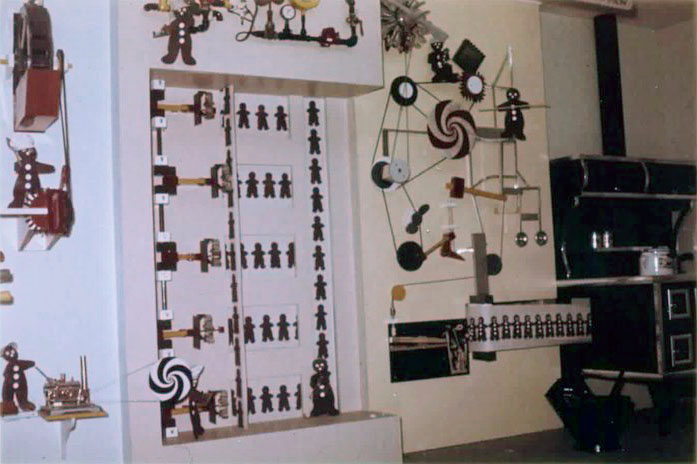 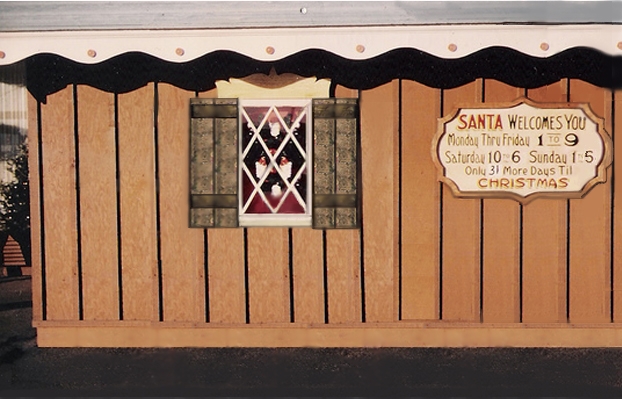 Candy Cane Lane. The line for the House can be seen in the background. 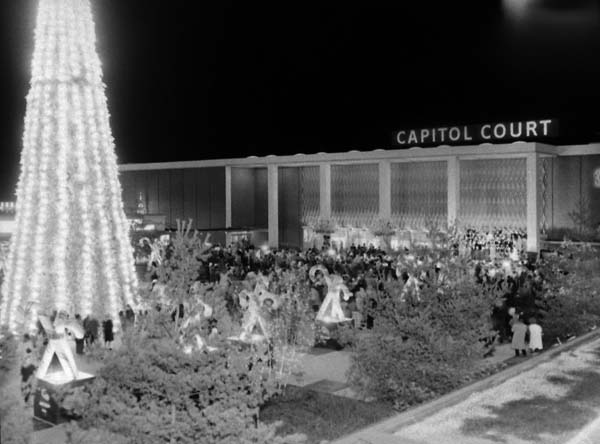 Pictures of Capitol Court in late 1978 as it was being enclosed, including the House under the new roof, and candy canes along the corridors. 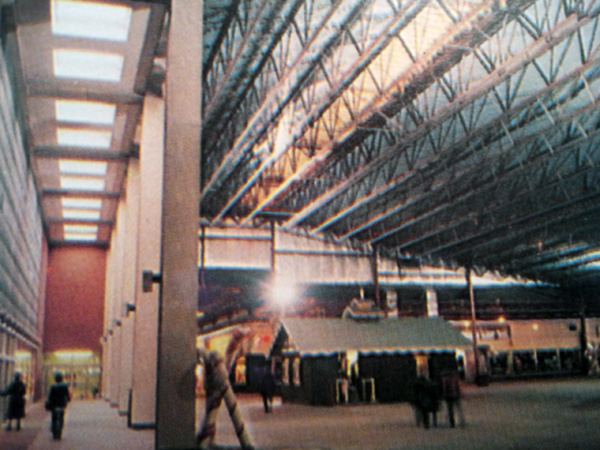 On December 5, 2006, I was interviewed on Milwaukee's AM 920 WOKY radio "Mighty 92 Flashback" on the morning program to talk
about House memories and this web site.

I can't help but wonder if there was a connection between "Kooky Cooky House" and Cooky the Cook on WGN Chicago's "Bozo the Clown",
as played by Roy Brown for more than two decades. He was often referred to as "our kooky cook Cooky".

The original House had an audio narration by WISN radio personality Charlie Hanson.

Kooky Cooky House memories were featured on page 94 of the November 2012 issue of M magazine.

We'll post them here! If you have pictures, that would be great. I know there must be hundreds of them in family
photo albums throughout the Milwaukee area.